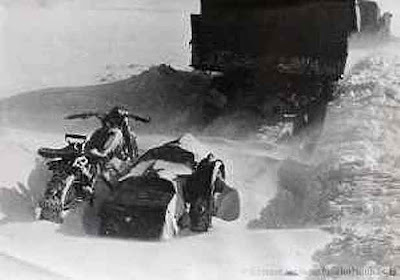 Not a very nice looking day on the Russian Front. 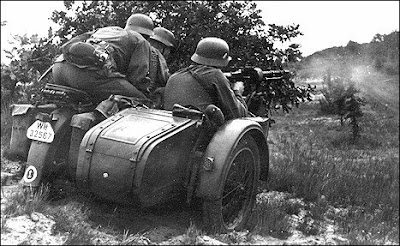 Photo of a German Sidecar crew in action firing an MG 34 from the sidecar mount at some distant target. They are hunkered down next to a bush and looked pretty exposed and nervous about their situation. 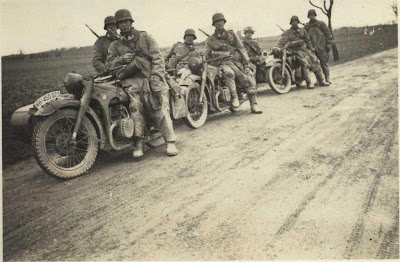 The German Military made extensive use of motorcycle sidecars during the 2ND World War. They went as far as to develop companies of sidecar rigs. Often they had a three man crew and carried mounted automatic weapons. From what I've read their strategic use was limited. They had a wide variety of different models. Early on many were civilian rigs which were confiscated by the government. Later in the war manufacturers were building rigs specifically for the military. BMW and Zundapp were the primary suppliers. I'm sure there were other suppliers too. 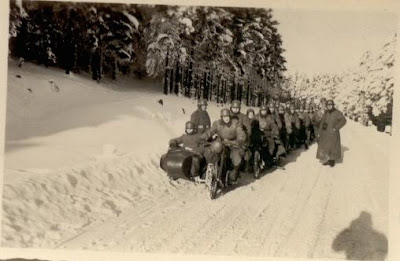 I don't envy the crews which were subjected to Winter conditions and all types of weather. Their standard issue was a rubber type cape over wool which doesn't compare to today's high tech materials. Those bikes (and riders) must have been tough to withstand the conditions and loads they carried. I wonder if they had chains or special snow tires? Some of the rigs did have a driven sidecar wheel and dual range transmissions ( w/ 2 reverse gears) which would greatly help out in the snow. The Russian built Urals' use somewhat of the same setup on some models. 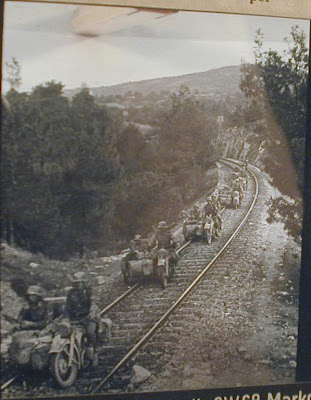 When there wasn't an actual road it looks like a railroad bed would do. I've been on a few roads that felt kind of like that. These guys look like they are in for a bumpy ride. You'd think it would rattle the bikes apart.

The guy seated in front doesn't appear to be enjoying his ride too much. Probably isn't very warm, looking at the terrain and the gear they are wearing. I don't think the US military used too many sidecar rigs. They used a lot of bikes for messenger purposes, but not for offensive purposes.
Posted by BMW HACKER at 10:57 AM

Holly Cow! I was the lead designer on the Vetter Terraplane II project in 1981.

That shot of those troops on a railroad bed brought back old memories. We used to use an 400 foot section of abandoned railroad spur next to the Vetter factory to test out fairing mounts. Riding over those ties was so grueling that that two lengths of the "track" were about all we could count on from one rider at a time. It became a task shared by the two test riders, the design/engineering staff, andd anyone else who would step up.

We broke the frame on two GoldWings.

Hi, i saw these pictures of WWII bmw bikes and they are very beatiful. The principal military bmw was the R12. Do you you know if the Bmw R2 could be a military bike used in the WWII? Thanks and bye!
Edoardo