December in the Desert

Nice to be down in the sunny Southwest again!
We have been busy cleaning up our lot / vehicles / trailers , etc.
Darian is in the process of planting new flowers around the property.
Drove into just enough foul weather coming South to make a mess of everything.
Lots of nasty black "road grime" from wet, snow melting highway sections.

right after arriving, a pretty cool old V1000 Convert (Auto Transmission) Moto Guzzi showed up on Craigslist. The bike was only a couple blocks away. A friend of mine here also saw the bike and "beat me to it" on a purchase. The seller was asking $1500.00, my friend picked it up for $900.00 which was a pretty good deal.
I went over with my trailer to haul it home for him. The bike has good possibilities, as long it is mechanically sound...that has yet to be determined. He got the bike running, but it needs some more fine tuning.
(click on images to enlarge") 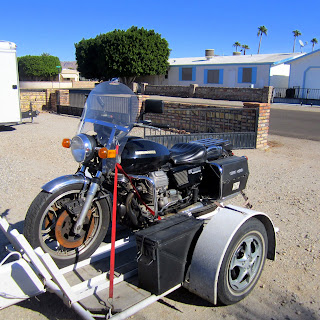 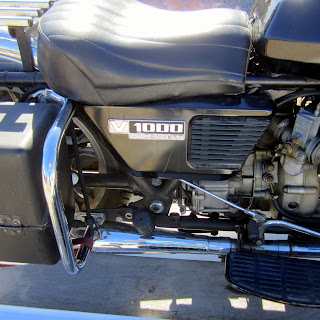 The bike appears to be in pretty cood condition, showing 14k miles on the odometer. Not sure if the mileage is accurate. Looking at the foot pegs, foot boards, they show very little wear, if any at all. 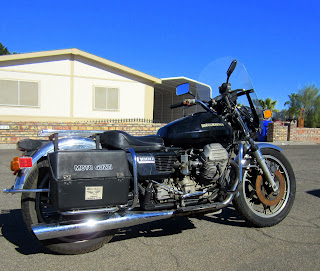 The proud new owner of the Guzzi: 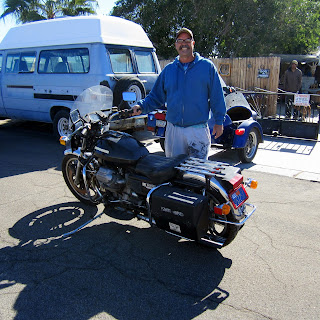 The old Honda Gold Wing has been dormant since last March due to a non-functioning headlight and "sticky" front brake calipers. After some other tasks around here I decided to try to figure out the lighting glitch. Luckily, I have a friend next door who happens to be a pretty good electrical "wiz". After some checking of the systems we figured out that the "backup lighting system" had a malfunction present. The early Honda Gold Wings had a back up system which would some how overcome burned out bulbs by redirecting power through alternate light filaments. (I think?). Any way we found headlight power going into the "box" but none coming out. We simply bypassed the "box" and all systems work as they should.
The front brake calipers were slated to be rebuilt, but I removed the calipers from the rotors, extended them further than their normal travel a few times, rotated the pistons in the bores, and the "sticky" calipers now work as they should. I will change out the brake fluid and run them another Winter season as is.

Decided to take a quick 200 mile loop the other day. The ride was pretty cold up through Quartsite AZ / Blythe CA. then some back roads back to Yuma. The old bike ran / braked flawlessly and got over 40 mpg as usual. 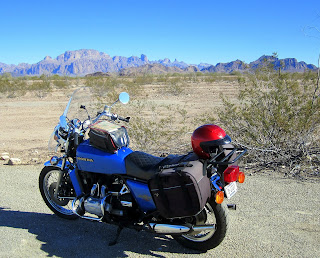 I spied a pretty cool old "Califia" after market Gold Wing seat on EBay the other day. I do like the aftermarket seat now on the bike, but the padding feels a bit thin after 200 miles or so. The seat was listed starting at $100.00 a few weeks ago...no bidders. It was re-listed last week starting at $60.00. I decided to "go for it" and won the second auction for $102.50. Not too bad a price for a nice (rare) seat.: 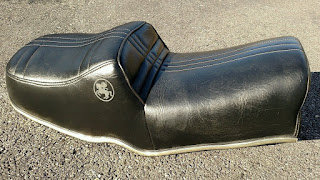 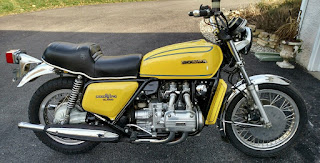 Hopefully the seat will be a bit more comfortable. If I don't like it, it should bring back the purchase price (or more) without any problem.
Posted by BMW HACKER at 10:21 AM