1953 Zundapp KS 601....this bike appears to have an after market fender light and tail light guard installed. Other than that it is the same model as the 1954 I will be bringing home. 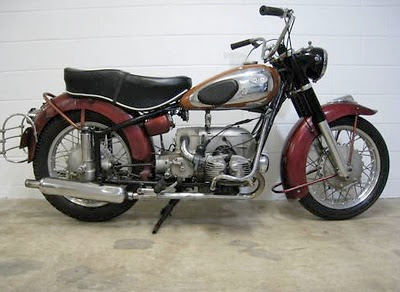 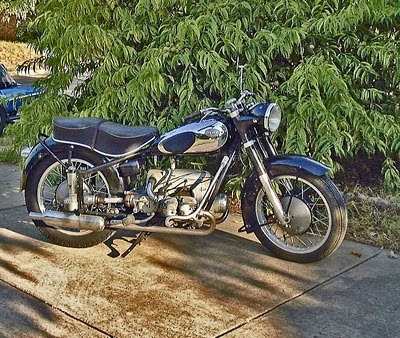 A few years ago I happened upon this old forlorn 1954 Zundapp sitting in an acquaintance's barn. He had purchased it from a relative years ago and just never got around to doing anything with it. The asking price was quite high so I never gave it any more thought. 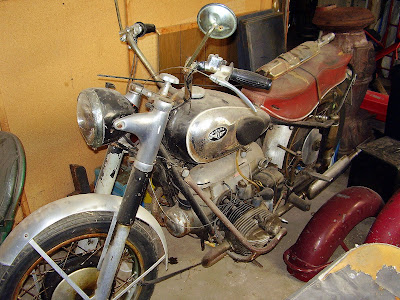 A previous owner had swapped fenders and installed some smaller alloy fenders. Someone saw this photo and thought they were an after market English fender set. The currant owner hunted down a pair of original fenders, a toolbox and a pair of nice carb intake tubes. Not sure what other items he scrounged up. 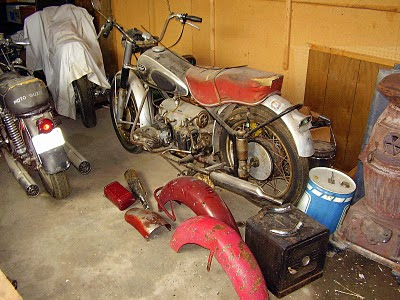 My old BMW R75/5 has been just sitting and I fire it up now and then for a short ride. I did ride it around 1600 miles last summer, riding through Glacier Park and then down to the Spring Solstice Party in Roberts MT. The old /5 has always ran great but I came to the conclusion that I would like to take on a new project. The /5 BMW will need to be sold to finance and make room for the new project.
I contacted the owner of the 1954 Zundapp and by chance he had dropped his price by a substantial amount. I did a lot of Internet research and contacted a Zundapp Guru in Texas. He has restored numerous Zundapps and sells parts on the side. Parts are available but some are quite expensive and some parts are very tough to find. Luckily the 54 I am looking at is mostly complete. missing a few minor items like the original tail light. I found photos of the original tail lights and by chance they are exactly like the one I mounted on my sidecar. I have found others available on the Internet for less than $50.00. I also found a complete engine gasket set for $40.00 so have ordered that. 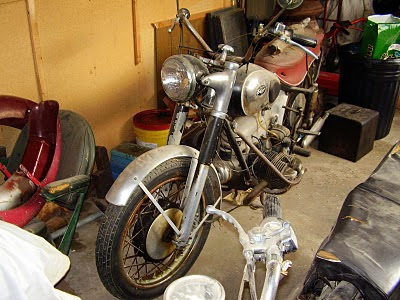 The bike engine is currently not free. Likely some moisture has formed in the cylinder and caused rust to form. Quite common on bikes that sit. My last project BMW had sat out for over 20 years in the snow, rain, etc and suffered a similar fate. With patience and care I was able to free the engine with no damage and repair it with no problems. I hope the Zundapp will be as simple a fix. At least it has never sat outside since it was taken off the road.

The cost to completely restore one of these bikes would likely cost more than the final product is worth. I hope to go through any mechanical issues found and get it in running order, leaving the patina as found...other than a careful, serious clean up that will need to be performed.
The Texas Zundapp "expert" Told me that my purchase price is reasonable and that I shouldn't get hurt on the deal. If my plans for getting the bike running do not work out I would hope to at least get my investment back on a resale.
I will miss my old 1973 R75/5 which I have proudly owned since the early 90's. It has been a great , reliable bike for us and has served us well. The bike has never let me down in nearly 50000 miles of riding. I have spent a lot of money on the bike over the years, but that comes with owning these old vintage motorcycles. I have a couple of potential buyers coming to look at the BMW. I ran it on EBay but the price never got near what I am asking. There are always others out there looking to get into an old Airhead so it will eventually sell, to a good owner I hope.
Hopefully the Zundapp Project will not bankrupt me! I am looking forward to getting possession of the bike and begin my "Archaeological" process.