Received this Acewell Computer / Speedo assembly on Friday and worked this weekend to get it installed. I really like the looks of it and the installation was easy with the help of a thread on the "ADV Site"....under "Olds Cool". An ADV'er did the installation on his /7 (?) and documented everything as he went....even posted his wiring diagrams etc.....really helped me out on my installation. The Acewell unit won't facilitate the BMW generator light system so I simply found the smallest LED light I could, drilled (gasp) the headlight bucket and mounted it there...(below photo arrow) I think it looks pretty good...... 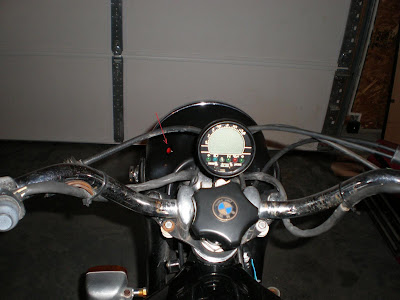 Mounted the Acewell using the existing BMW gauge mount.....cut off the ears....bent it a little lower to gain the angle I needed, then made up some spacers to gain the correct height to clear the /5 steering damper......I have not tackled the magnetic speedometer/sender installation to the front wheel yet........I'll get on that task next..... 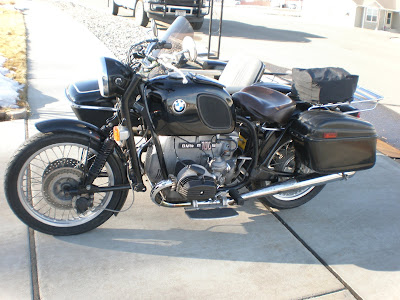 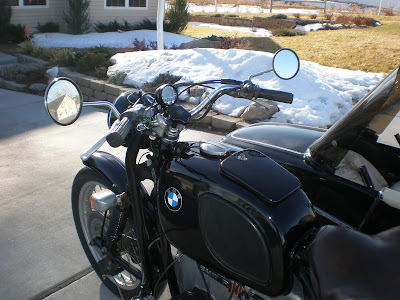 The wad of wiring hanging off the handlebars was a temporary "generator light" I hooked up to make sure it was working after hacking up the BMW wiring harness for the installation............ 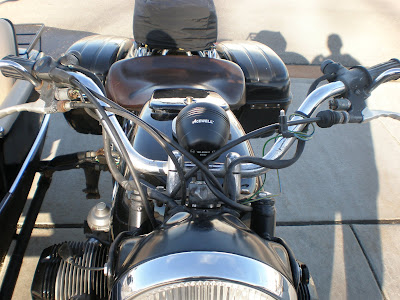 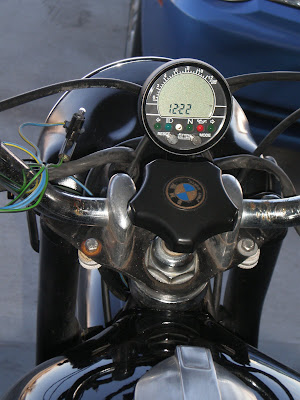 I order a couple of special brackets yesterday.....I need to affix the tie-down for the /5 steering friction damper to a cross member under the tank.....don't want to weld to the frame so found some generic brackets at Graingers.....Also will use a similar bracket to attach the right side "Henrys" floorboard to the sidecar frame.....the lower sub frame I used won't allow the right floorboard to mount to the bike........I'll mount the floorboard reversed to the sidecar frame to achieve the same end.....I really like the extra foot places/spaces when on long rides to keep comfortable.....I'll post that when its' done.......I took the bike for its' maiden voyage on Sunday. Ran it 100' up the street and back...(on a low, square front tire, no front brakes and no tags....)
Purchased a pair of tires for the sidecar tug tonight.....was buying Dunlops for years but they doubled in price in the past two years.......last set (last summer) were Bridgestone S11's, great soft tires (great for solo use).....nearly wore them off on the /5 tug in 5000 miles or so..... this time I went with a pair of Shinko tires for the "new" tug. For the sidecar tug use I eat them up so fast that I thought I'd try a cheaper, likely harder tire......Shinkos are likely some Chinese brand.....but I guess about everything is Chinese these days......we'll see how fast they wear out.....With the sidehack attached the softer "grippier" tires aren't quite so necessary.....I put some cheapo hard tires on a solo Yamaha 850 years ago and they were terrible, slippery and harder than a rock...no good for solo use and they scared the crap out of me more once.....
also bought an Odyssey dry cell battery via EBay. Never tried a Dry Cell battery before but I've read that the Odyssey is a good one....we'll see.
Had some Pay Pal play money sitting so figured I'd better use it for things needed, rather than for things not really needed.....
Posted by BMW HACKER at 6:42 PM