A beautiful 80 degrees here today so I pulled out the BMW "Hag" minus the sidecar and installed to "New to me" stock /5 cigar style mufflers. These are an original pair from a 1972 BMW R75/5. The 1970 thru 1973 BMW "R" bikes used this style of muffler. They were very prone to rust so there aren't too many original survivors left in the world. The BMW replacements were the later style mufflers. There are a couple of manufacturers selling this style muffler in stainless steel but the are quite expensive and tend to turn to a gold color from the heat since they are stainless steel. 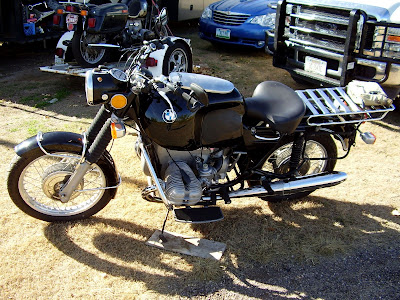 The mufflers have some chrome loss where the attach to the header pipe but the muffler shields I installed hides that problem...the left side muffler has a ding but it is down low and not very visible....I took the bike for a 30 mile run and the mufflers are very quiet. As I age I now appreciate quieter exhaust systems. I should get a lot of years out of these....they have a couple of surface rust spots underneath at the seams but it doesn't appear to be very deep.
I hadn't run the bike without the sidecar for quite a while and was surprised at the amount of power with the 900cc engine running solo. With the 37:11 final drive it winds up quickly off the line and actually hauls ass. I found that the engine oil temperature was running the same with or without the side car attached. 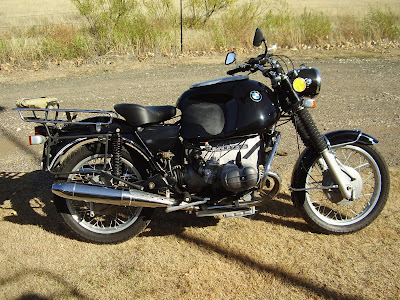 Uncovered the R100S / R90/6 to wipe it down as it has been covered up for 3 weeks and has weathered a few rainstorms.....below is a photo of the 1973 R75/5 Long Wheel Base sub frame after installation. 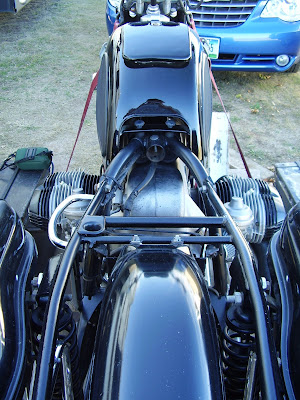 I temporarily mounted the Bates Bags...they will go on some different mounts and eventually go to the R75/5...the stock BMW suitcase style bags & mounts will go to the R100S. 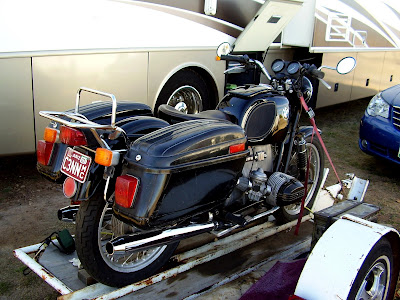 The QSL Solo seat is just sitting on the bike. It will sit higher on the frame when the mounting assembly is in place.....I loaned the stock QSL seat mount to a friend so he could have one fabricated for a QSL solo seat he has....he bought one with no mounting frame...mine is being used as a template..... 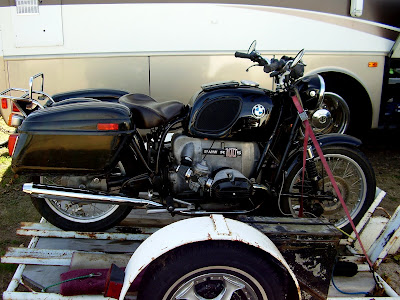 Hey, nice site you have here! Keep up the excellent work!