We wanted to do a little hiking a few days ago so decided to head over into California a few miles to some interesting areas. We've passed the turn off to "Gold Rock Ranch" dozens of times but didn't want to drive the rough road in with any of the vehicles we had in the past. 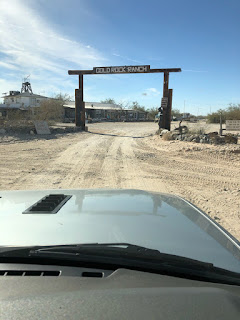 There are some small residences there and some RV spaces to rent. A little store with a museum describing the history of the area. A lot of off road folks filter in and out from the Algodones Dunes. Snooping around the museum we see information about "Tumco", a ghost town / abandoned mining site back across the highway. Seems there was at one time up to 3000 hardy souls living in Tumco. It was originally named "Hedges" but the name was changed when a large mining corporation purchased the mines and surrounding properties. 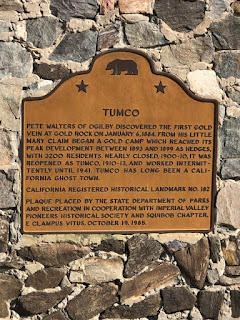 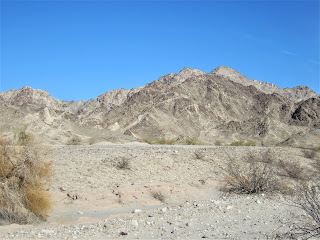 Recent rains made conditions possible for this lone mushroom to take hold. Poor thing was dry as a bone now, but still hanging in there. 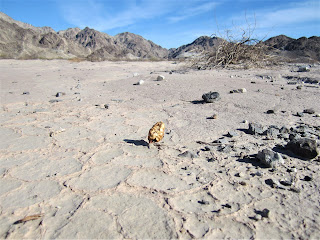 LOTS of old tin cans, thousands of them, scattered about the area. Also lots of rusty scrap metal, mine debris. 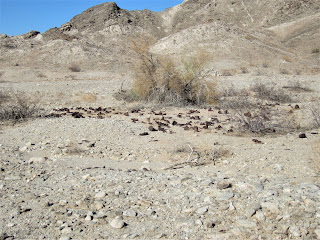 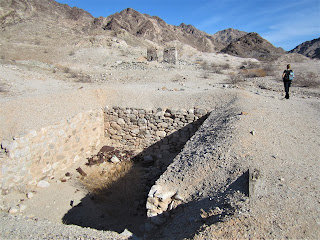 Two walls left standing, both about ready to collapse. 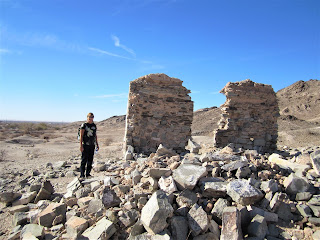 Quite a few remains of structures about. 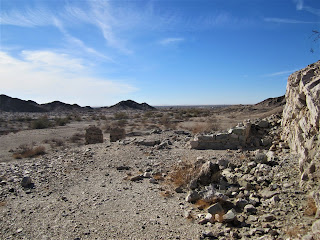 The most substantial building left standing. 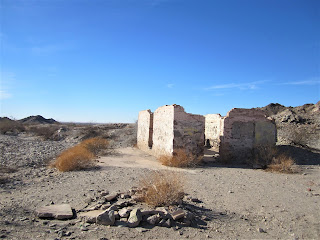 Remains of a floor slab. 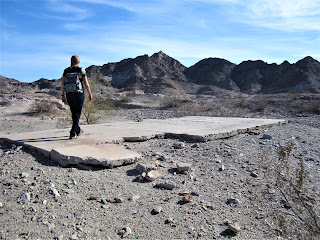 Not sure what the structure above was....definitely steel. 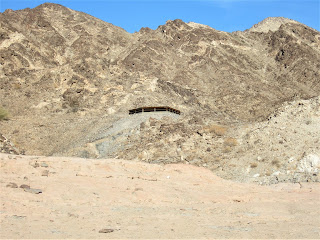 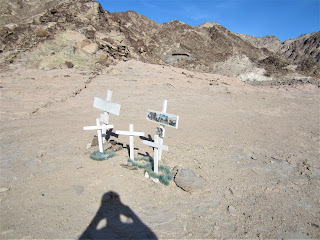 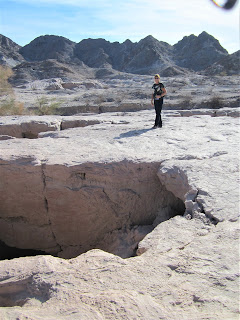 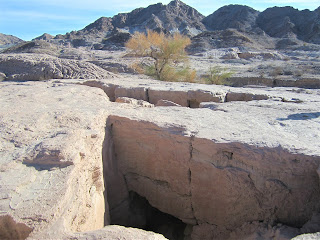 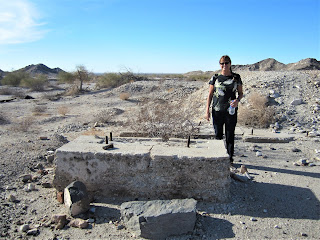 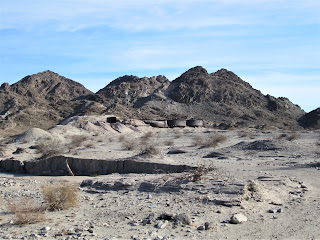 Posted by BMW HACKER at 10:08 PM No comments: Links to this post

Back in the AZ desert for the Winter.
Have lots of bike repairs to still do but kind have lost interest at the present time. Will get to them when I feel like it, which is not right now.
Been wanting a 4 WD for use here in the desert. Had my mind made up to buy a Suzuki Samurai...Sidekick or some thing like that.
Looked at Suzuki's, some Trackers, a couple Mitsubishi's. Drove a few vehicles and found the small Suzuki's to be "tinny", rattily and basically "cheap" feeling. My Wife wanted nothing to do with the small 2 door Samurai's as she felt claustrophobic in them, being so small.
The small 4 x 4's bring high dollars here. There are literally hundreds of them in our area. Cheapest ones around here priced from $3200.00 running as high as $6000.00.
After a few weeks of hunting I spied a very nice / straight 1997 Land Rover Discovery sitting along a residential street with a "for sale" sign in the window. Priced at $2950.00. Definitely the cheapest, nicest rig I'd seen so far. Auto transmission and small 4.0 liter V-8. Odometer read 154k miles.
With that mileage I suspect that most "bugs" have been corrected...lol.
Made arrangements with the owner to test drive that afternoon. Seller was a nice young guy. He bought it as a "drive to work" rig, but right after purchase he was promoted in his job and given a company vehicle. I noticed that the rear sunroof was partially open in the "vent" position. Found it would not close and glass was sitting very crooked in the mechanism, not  good. The owner was not able to get it to close and just left it open as it sat in his garage all the time. He pointed out known problems to me and seemed a bit intimidated by the rig. I think his mechanical abilities were minimum.
The rig actually drove wonderfully....AC was ice cold...all the other power windows functioned properly....leather interior was very nice with only honest wear. The transfer case shifted through its' modes without problem. A couple of minor oil "seeps" found (transfer case inspection plate / power steering hose fitting) but nothing to send me running away. Had new tires installed (not aggressive off road tires), a new battery, and recent oil change.
That night I began an internet search concerning Land Rovers. Found a huge owners base.....most in a deep "Love / Hate" relationship with their rigs. Found numerous reoccurring issues that some owners have. Some folks claim they're the worst vehicles ever made....others say they are reliable and love them. Did find a huge used parts inventory via eBay....and parts fairly cheap!
After reviewing the "list" of vehicles I'd driven / considered, and weighed the risks of buying a 20+ year old British 4 X 4, I decided to make the guy an offer. Made an offer of $2.5k and after a bit of silence, the guy accepted the offer. 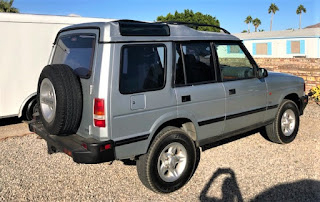 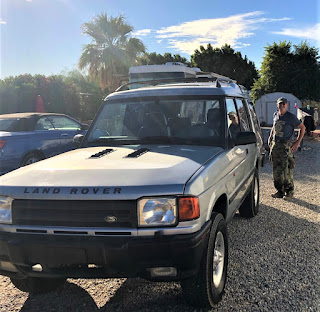 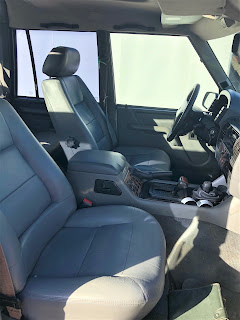 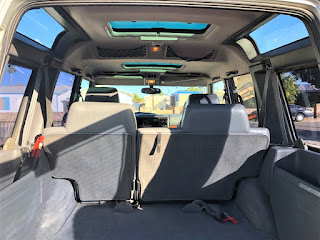 My first order of business was getting the rear sunroof fixed....or at least closed. The headliner is nice and clean so doesn't appear to have ever had any water leaks.
Could not find any schematics concerning the sunroof mechanism so went in kind of blind.
The glass was sitting very crooked so obviously the mechanism was out of alignment. I was able to remove the glass using a small right angle torx driver. 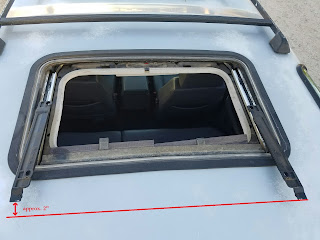 After some research I found that the headliner must be removed to fully access the sunroof motor....but the motor seemed to function fine. Looking over the headliner, I saw that it would be a BIG job to remove. Headliner removal would be a last resort.
I found the mechanical sunroof crank mechanism hiding behind a small plate next to the overhead electric switch. I lubricated the visible parts of the mechanism with silicone spray, then manually cranked the mechanism in and out. After a few "trips" the mechanism equaled itself straight.
I reinstalled the glass panel but could not get the window to retract "down" into its' closed location.
It would travel forward / back but would not drop. Thinking maybe it was just binding, I very carefully "tapped" the linkage (on a metal portion, much of it is plastic) and lo and behold it moved. Tapped both sides in succession and down it went. Now it seems to function properly, but we'll minimize the use of it.

So far I've spent some time looking things over, checking for loose screws / bolts (have found a few), and basically making some simple repairs. Found that the cruise control does not function, and the passenger electric seat "recline" operation is a bit finicky, but works. Small things....drivers door storage bin is missing, one headlight washer assembly was missing (found one on eBay and ordered for $15.00). Went to check the transfer case oil level (minor seep on inspection cover) and found the check / fill plug very tight and could not get it out. Afraid to damage anything so I shot some PB Blaster around the plug and will give it another try. Another Owner told me "not to be scared, put a cheater bar on it"...which is what he did when he encountered the same problem.
So far we are pretty happy with the purchase. My Wife is much more comfortable riding in this than any small 4 x 4 we drove. And I just love the looks / styling of this vehicle....all the window / glass area makes it a "wide open" feeling while driving.
Time will tell....ask me in a year if I still love it!....lol
Posted by BMW HACKER at 1:54 PM 3 comments: Links to this post