We've been trying to keep active and take a bicycle ride nearly every afternoon. Typically 2 - 4 miles. The other day we took an 8 mile ride around the area. 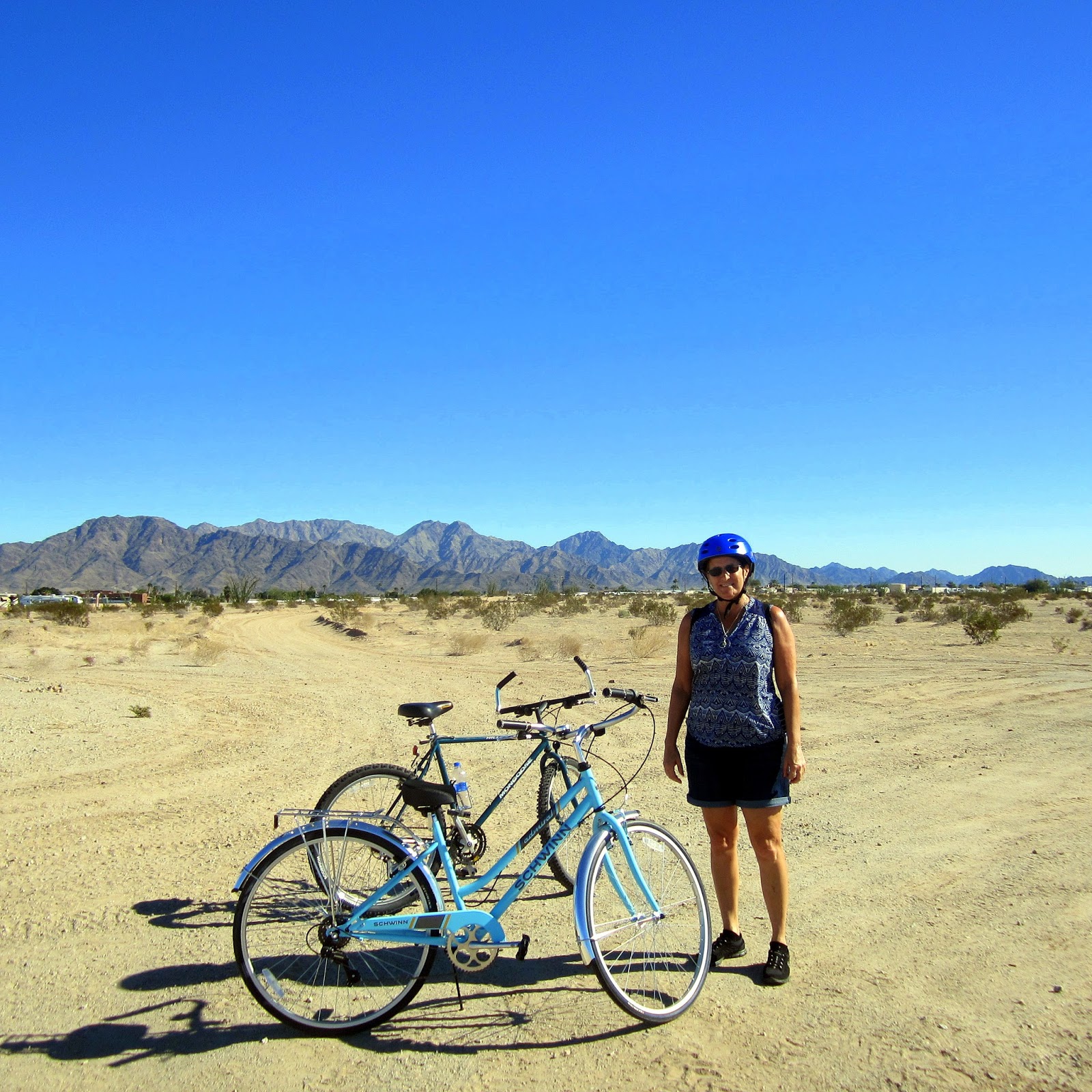 We stopped at a buddies place for a quick visit: 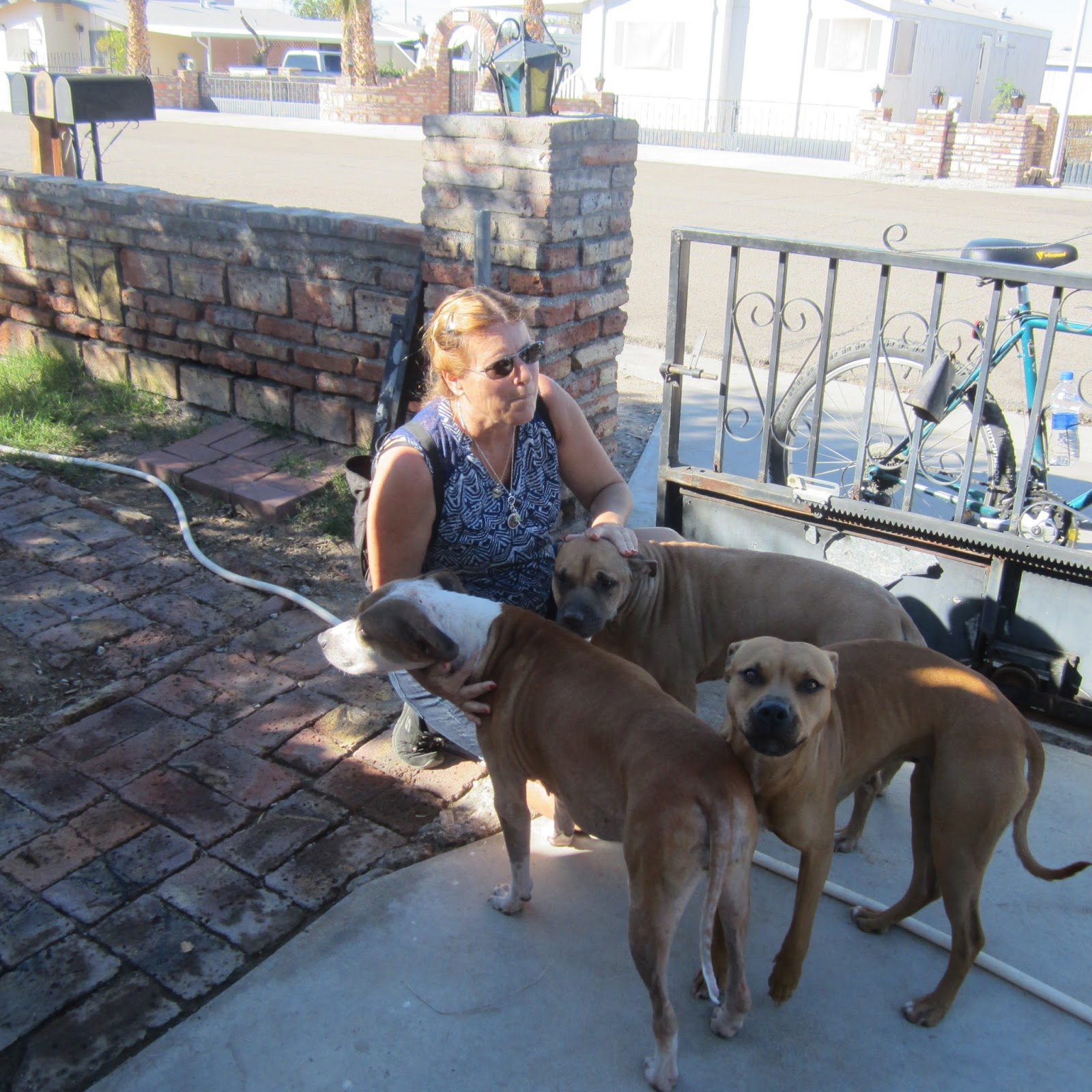 He owns a number of Pit Bulls and they are all great dogs...they love Darian. She usually brings them "treats". None today but they were just thrilled to see her as usual. One of his Dogs is on her last days with cancer. She is still as friendly as ever....it will be sad when she is gone. 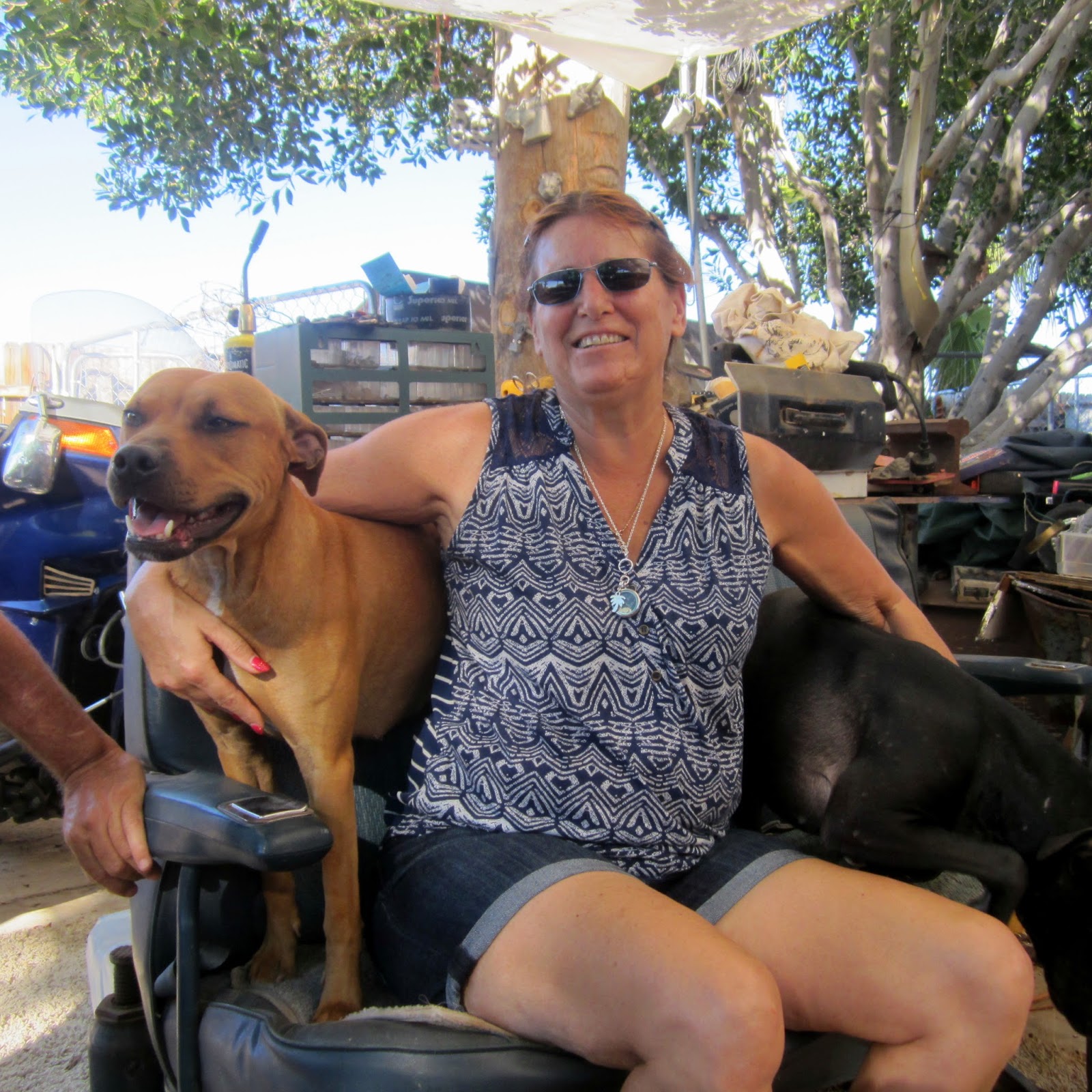 The weather looks fantastic for the next week so the Death Valley Airheads Rally is a "GO" for us. We've had sad news in the past 10 days with deaths of three friends and acquaintances, but maybe the trip will cheer us up a bit. Life does go on. It is always later than we think. 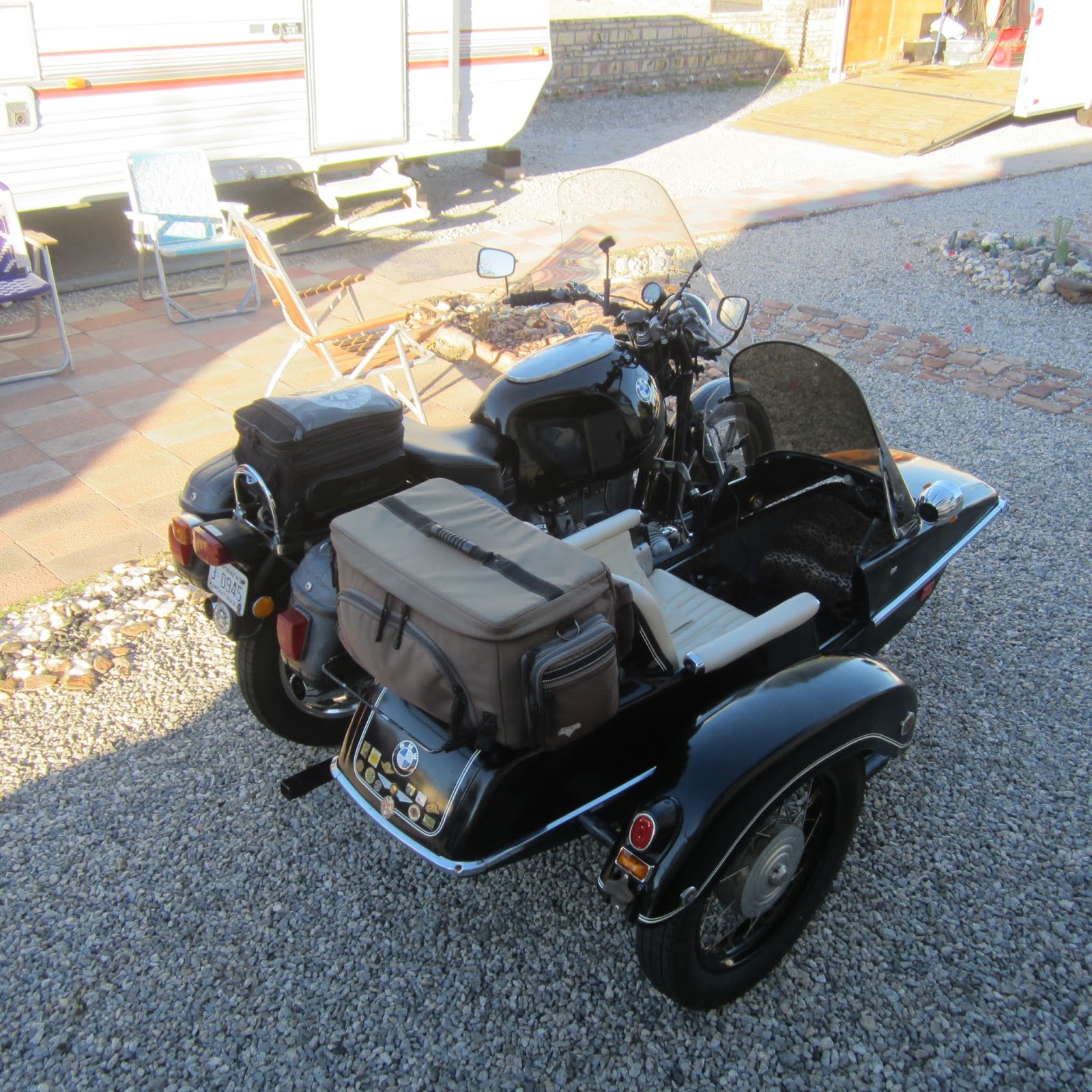 I did a "once over" on the bike and trailer and think all is "good to go" for a 1000+ mile trip. Installed a new rear Michelin "K-Block" rear tire. Found that the old rear tube had been folded over in an area on the last replacement. Tube never lost any air but definitely was an accident waiting to happen. I inflated / deflated the replacement tube numerous times so hope it didn't fold onto itself. I've never had that happen in the past after dozens of tire / tube replacements. The other tires will easily make the 1000 mile trip. The Pusher tire is the one needing replacement on a 3-1 ratio to the other tires. Only got about 2500 miles out of the last "K-Block" tire. 3000 miles is about the maximum life I get from any type of tire I've mounted. I've ran Dunlops, Bridgestones, Michelins, Avons, Shinko's. None seem to be any better than the other. I'm using the "K-Blocks" simply cause I want a little more rubber on the ground. Currently running "square" sidecar tires on all the wheels.
Found a broken wire when I hooked up the trailer / wire plug today. Ran and picked up a new 4 wire plug. The old one was a CHEAP Chinese made plug with wiring that looked as heavy as cotton thread. Way too thin. I went looking for a replacement and everything I found was "Made in China". I finally found a better quality plug, but it was still from China...U.S.A. made?...not much anymore....
Darian uses a GPS with a suction cup mount in the sidecar. The suction cup will no longer hold so I permanently mounted the bracket to the "wing" window in the sidecar. Meant drilling a 3/16" hole in the plexiglass but that's OK. The "Wing Windows" were old BMW wings from an unknown model for which I paid $12.00. They were missing one bracket so I made one from some hardware store plumbing brackets that I modified.
We plan on a short 250 mile day tomorrow to Joshua Tree Nat. Park. We've camped there before and plan on staying at the "White Tank" Campground. Great hiking trails there amongst the giant boulder formations.
2nd. day probably over to Tecopa Hot Springs. That will get us to Death Valley early on Friday so we can get a good camp spot.
Posted by BMW HACKER at 8:17 PM 1 comment: Links to this post

We attended the annual "Airhead Beemers Club Salton Sea Overnighter" last weekend.
Yuma had a good dose of rain on Thursday over night, and rain was forecast for Friday too. We loaded up the bike on Thursday and were ready to go for Friday AM. Looking at the Doplar Radar Friday morning, the storms were spotty and didn't appear to have any "big rain" so we headed out. We like to go over for two nights rather than one. The ride over was nice with cloud cover and mid 60's temperatures....great riding weather. Very minimal wind too.

We always make a stop at "Glamis" for a break.
(left "click" on photos to enlarge) 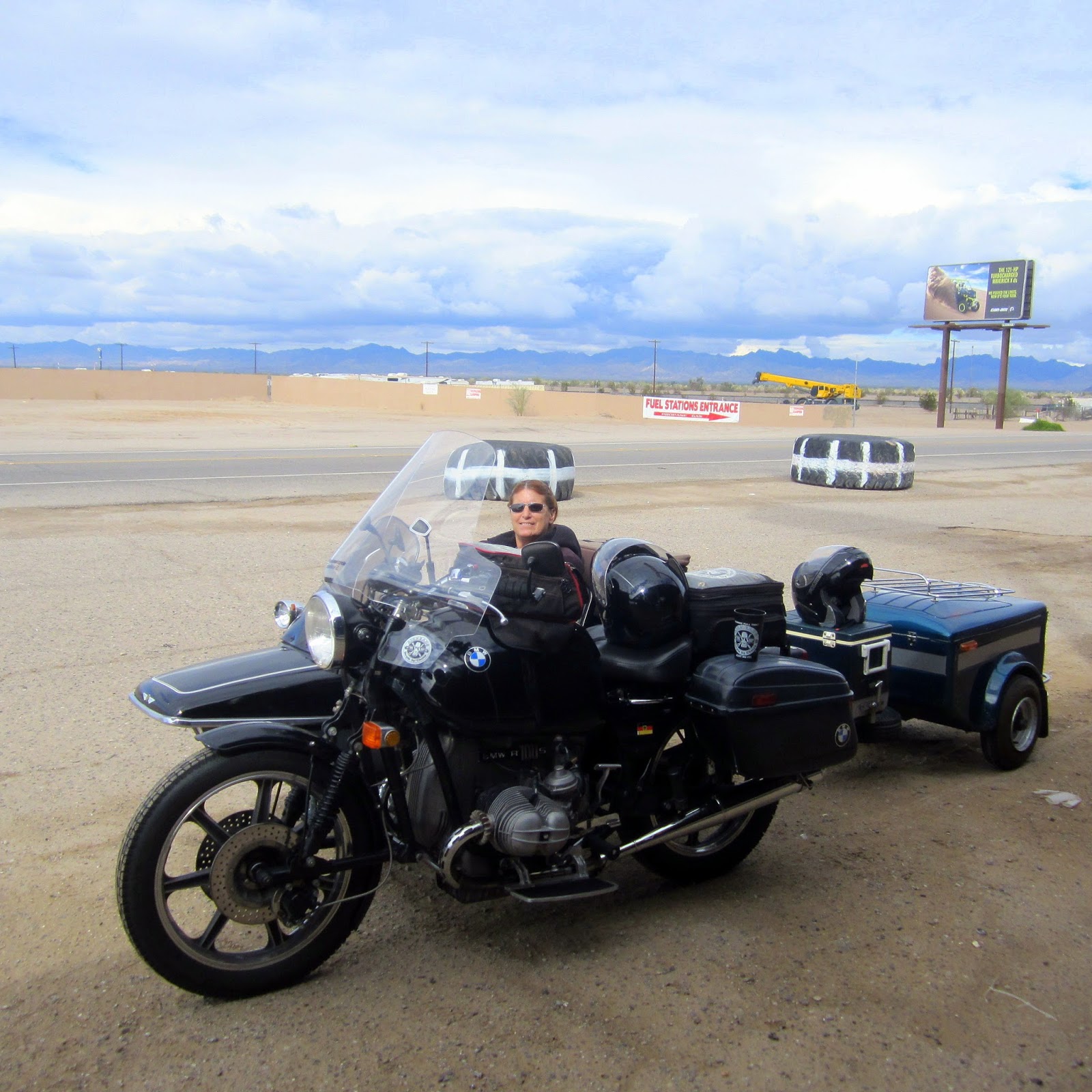 Always end up with curious folks looking at the sidecar setup. The short break turned into a 1/2 hour stop as usual. BS'd with one guy from Scotland for a bit... 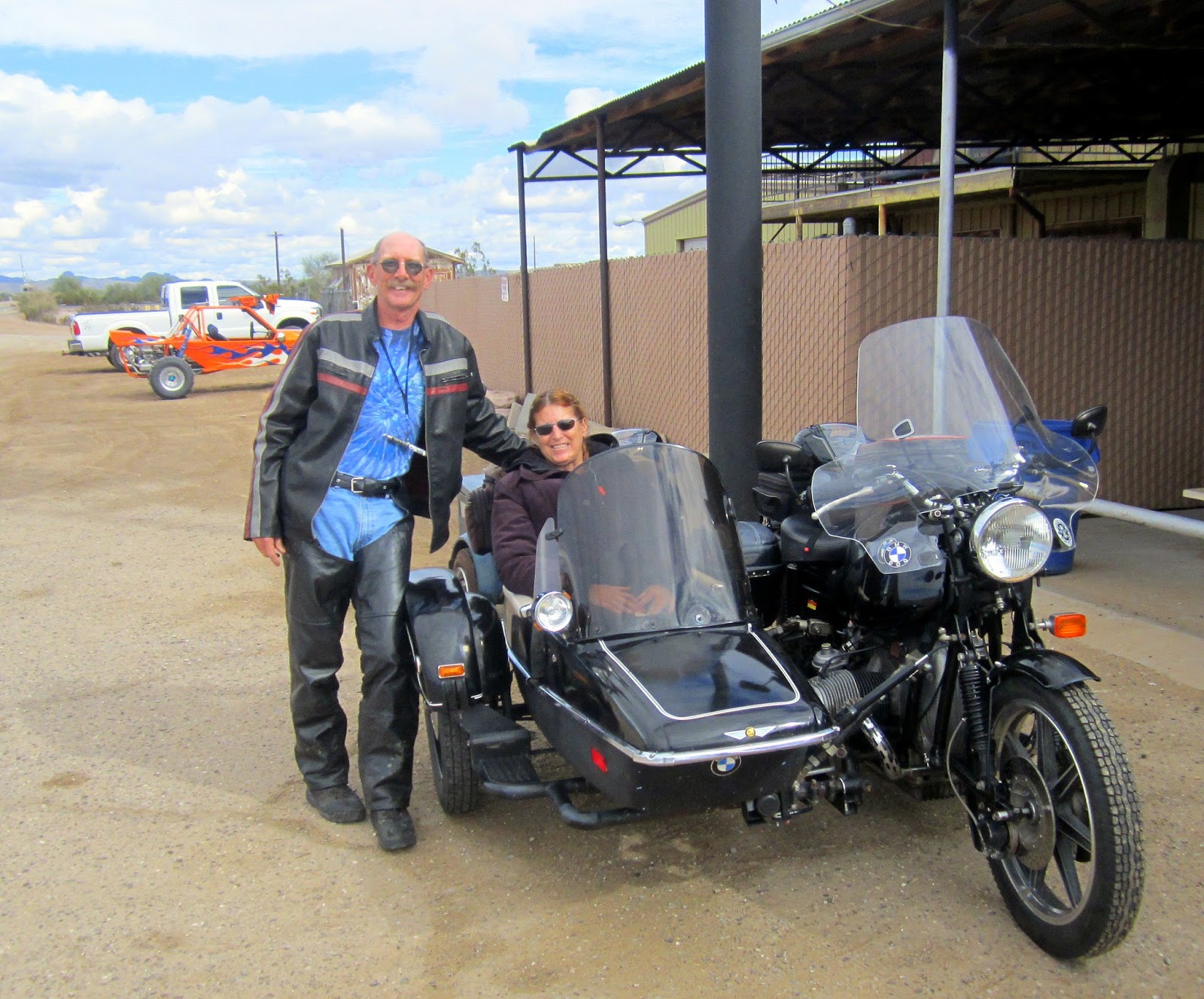 We always make a stop in Calipatria Ca. at a Mexican donut shop. They sell authentic food also. We both had a large lunch and bought 4 small loaves of bread (Bolillo's) for $12.00 total.

Niland Ca. (home of "Slab City") was the next stop for fuel & ice. Nothing much in Niland.

One nice thing about turning the "overnighter" into 2 nights is a better choice of tent spots...although none of them are very good. "Camping in the rocks". Our tent (not pictured) is a huge 6 person tent. Probably not a good choice for high wind situations but it has weathered through some pretty good wind storms. 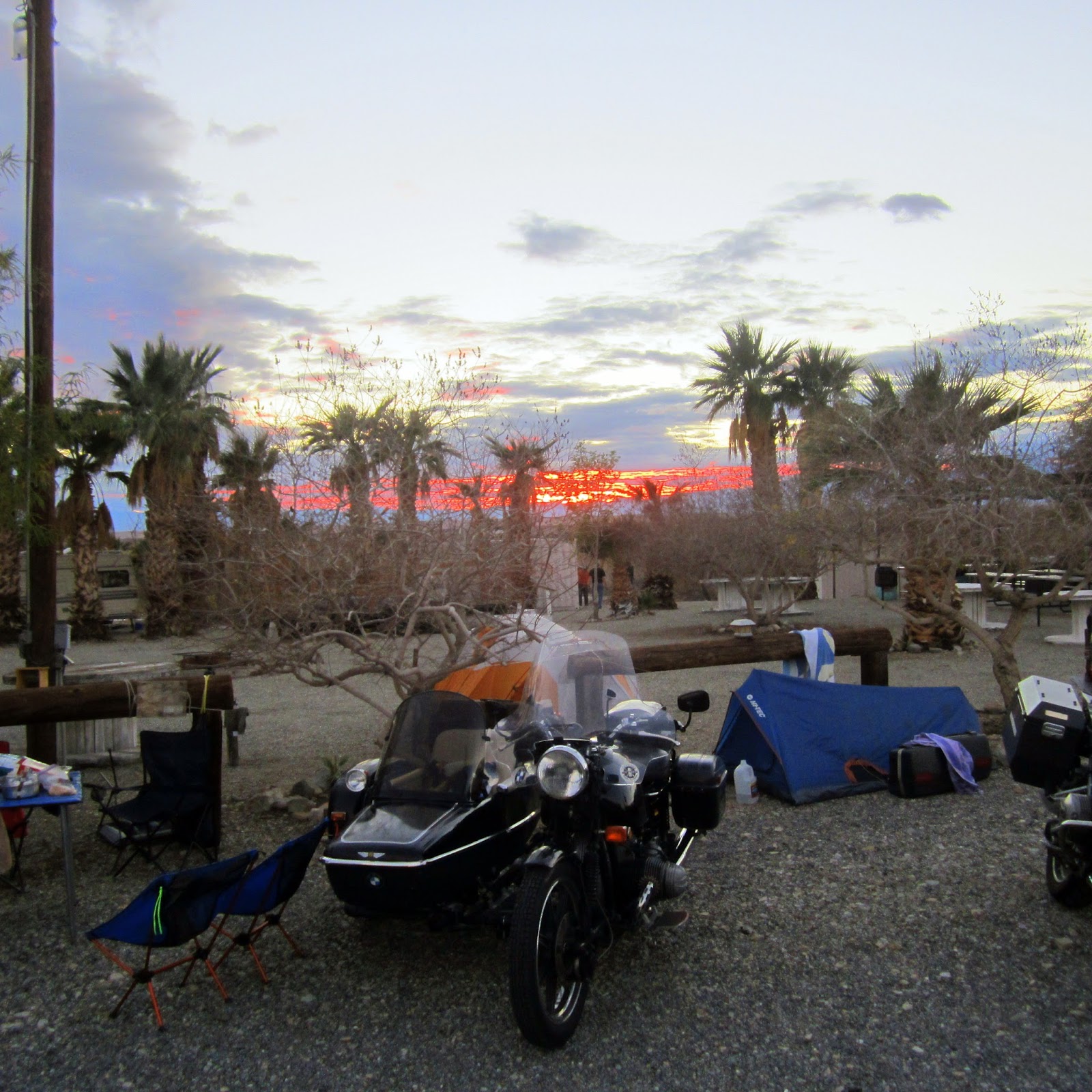 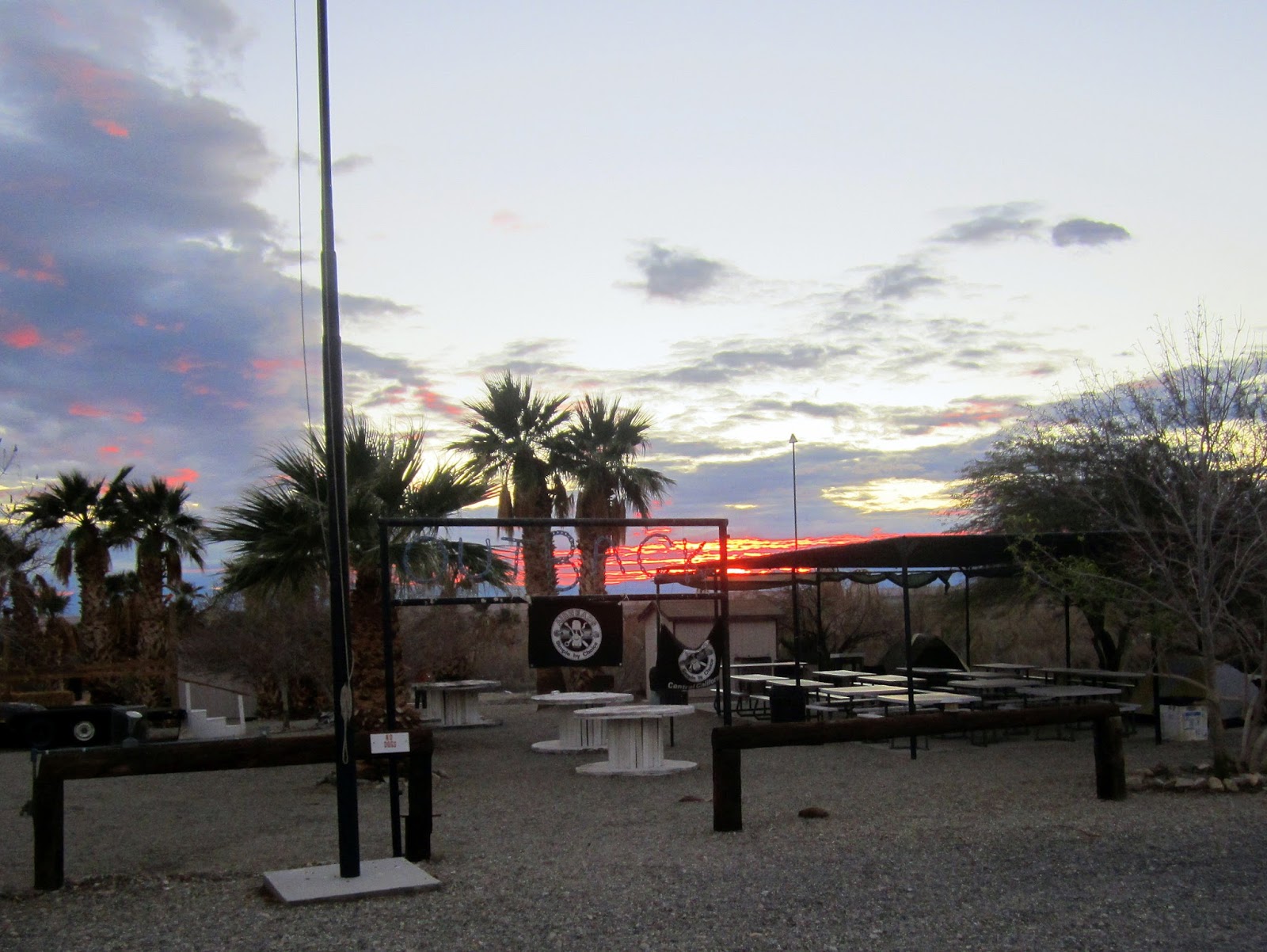 Nice turnout for the campout. Probably had a couple dozen folks there. Nice to catch up on everyones Summer riding adventures and BS about bikes, adventures and life in general. Many of us are gaining some years so health has also seemed to be an occasional  topic now...lol. One buddy from Phoenix was supposed to come to Yuma on Thursday, stay at our place and ride out with us. The rain scared him off and he didn't come over. Too bad as he wouldn't have got wet. 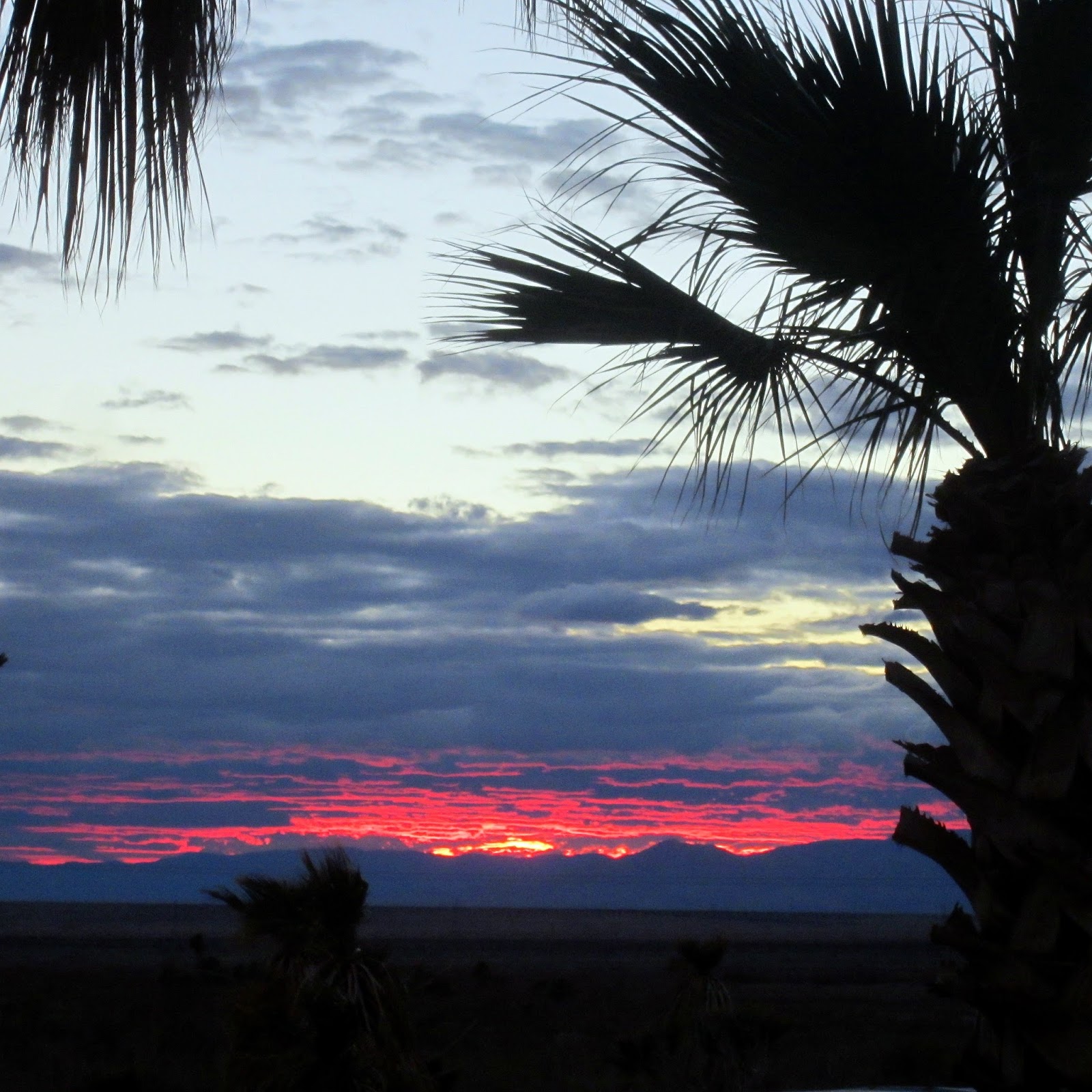 We are planning on traveling to Death Valley Ca. for the annual "Death Valley Airheads Rendezvous" in a couple of weeks. My rear pusher tire is getting a bit thin but I thought maybe it would make it to Death Valley and back. After arriving home last night, I saw noticeable further wear from the 130 mile trip home. Funny how tire tread seems to "disappear" so quickly when they are approaching the end of their life. I have a used conventional 18" tire I could mount, but decided to go ahead and order another Metzler "K-Block" tire. I ordered it last night so should have it in plenty of time to mount for Death Valley. I contemplated running the existing tire to the end, and then changing the tire during the trip. Not sure if I really want to perform a tire swap "on the road"....I think I could get a couple hundred more miles out of the currant tire...we'll see. 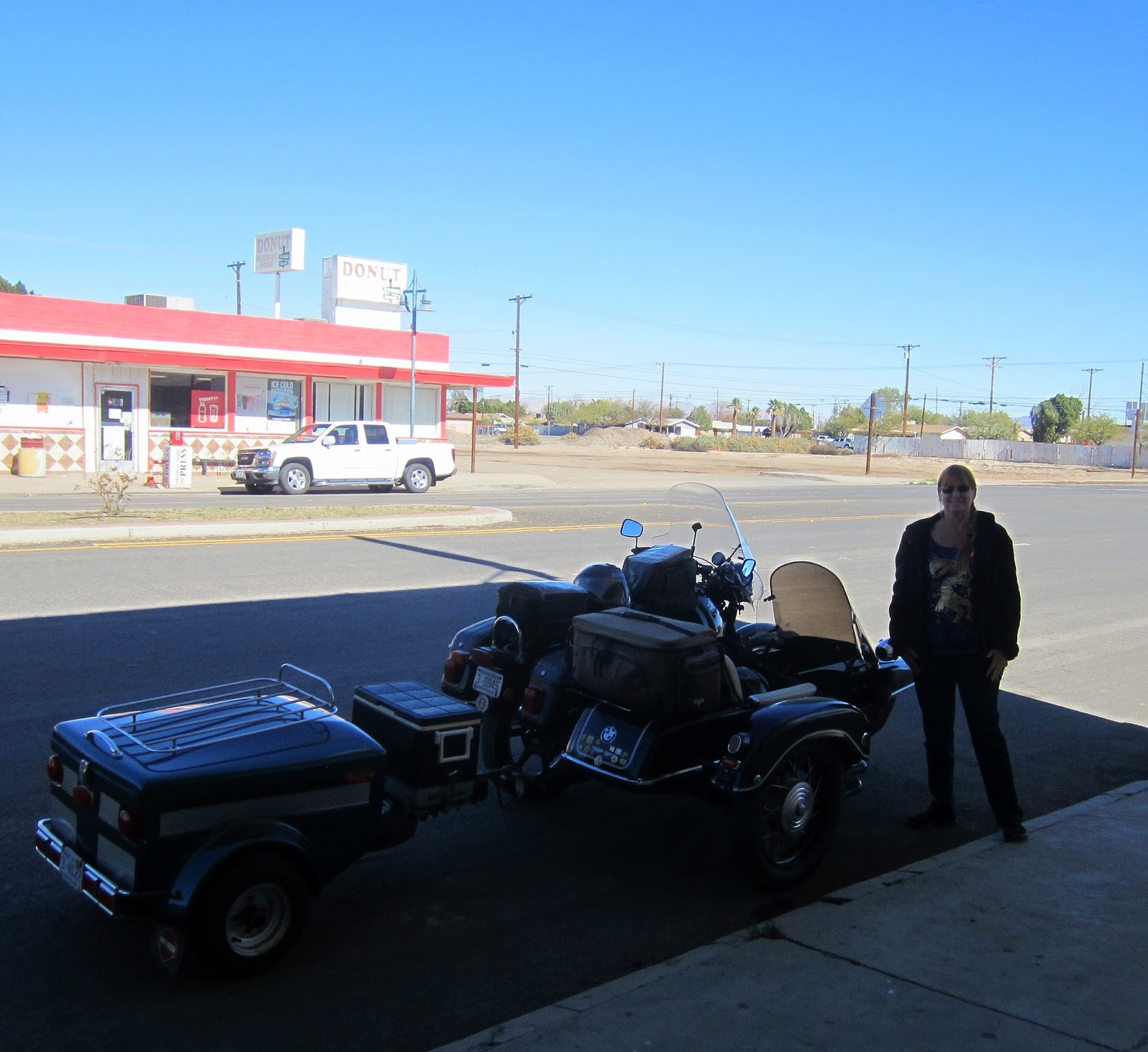 Took a minor detour to a Glamis Overlook...lot's of sand. 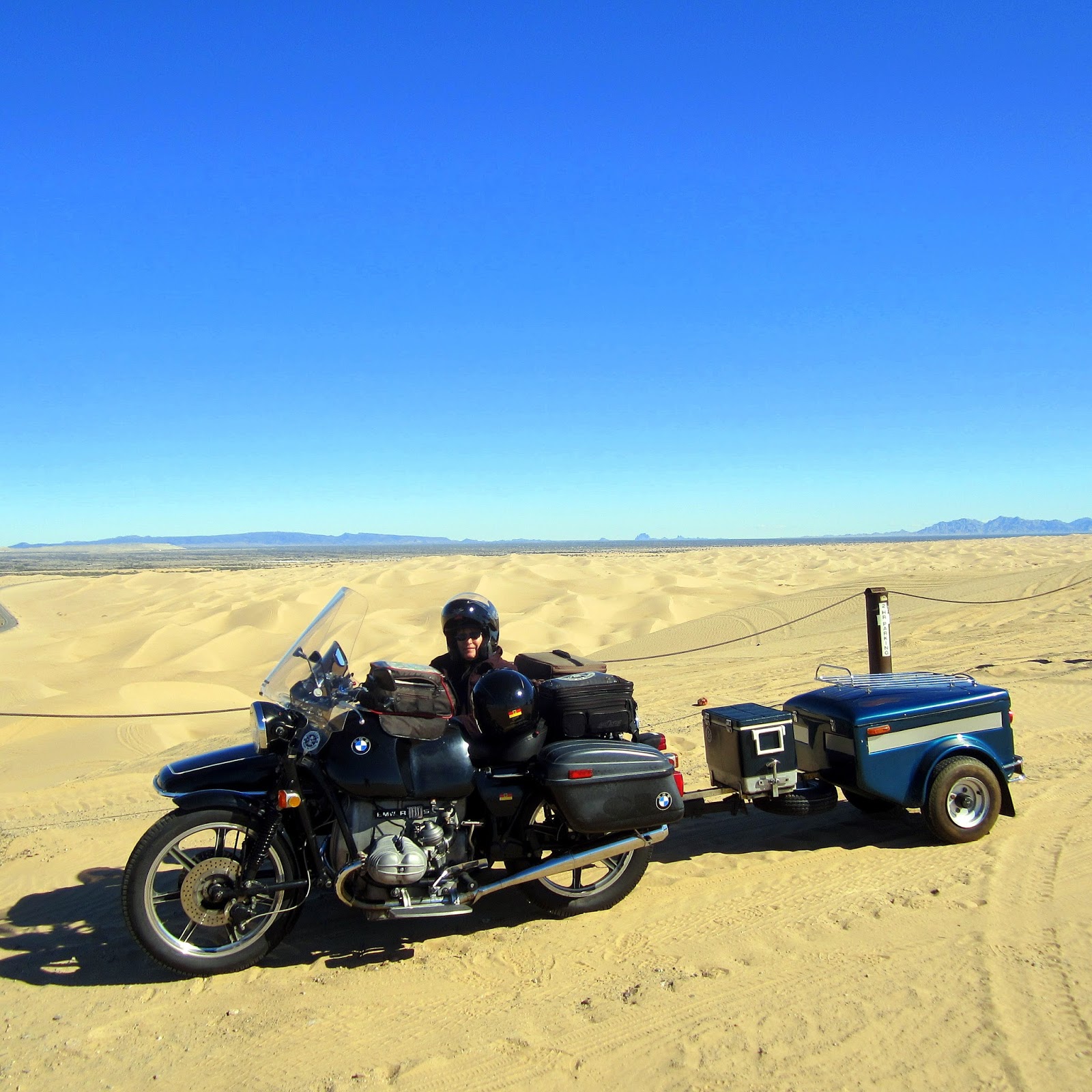 Picacho Peak in the distance: 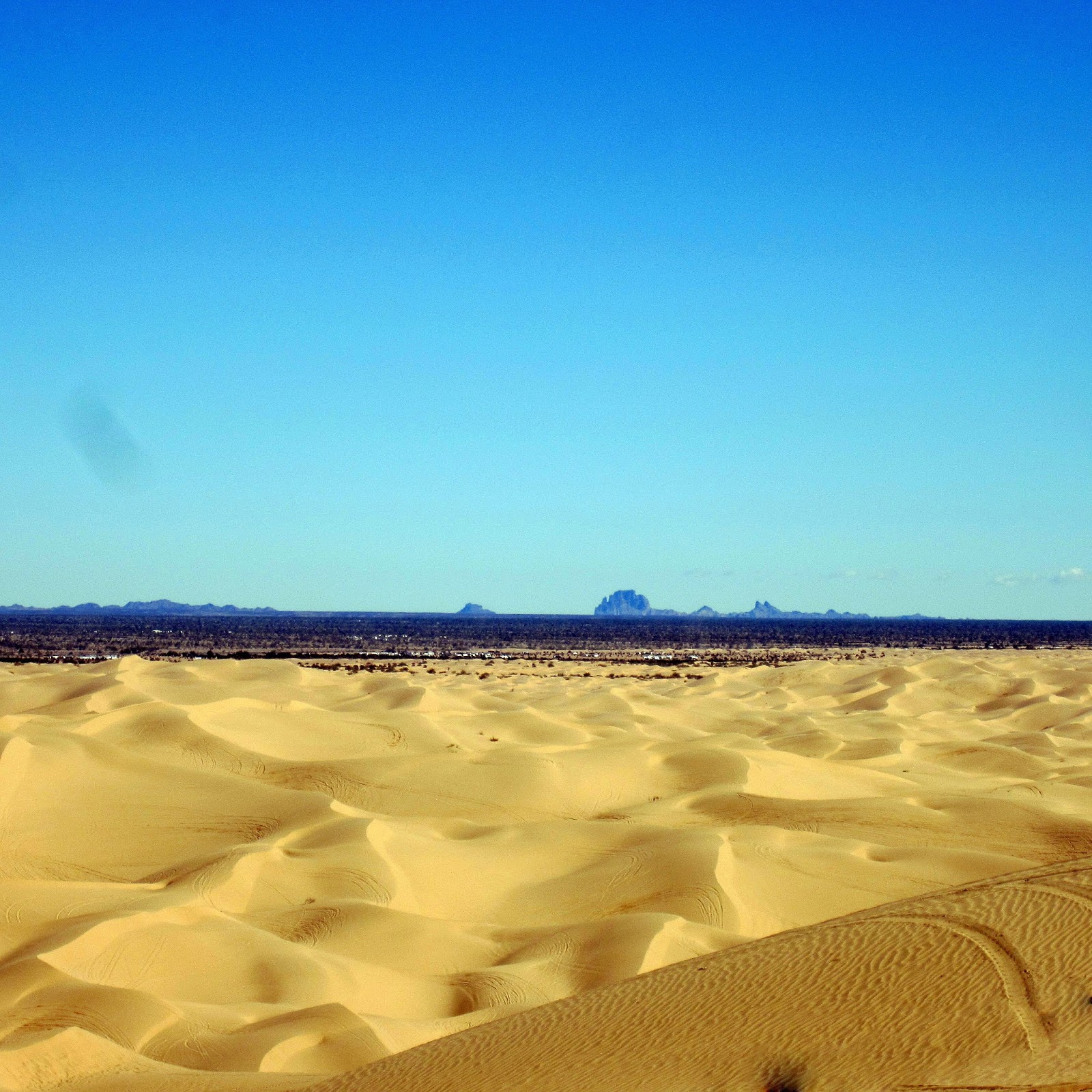 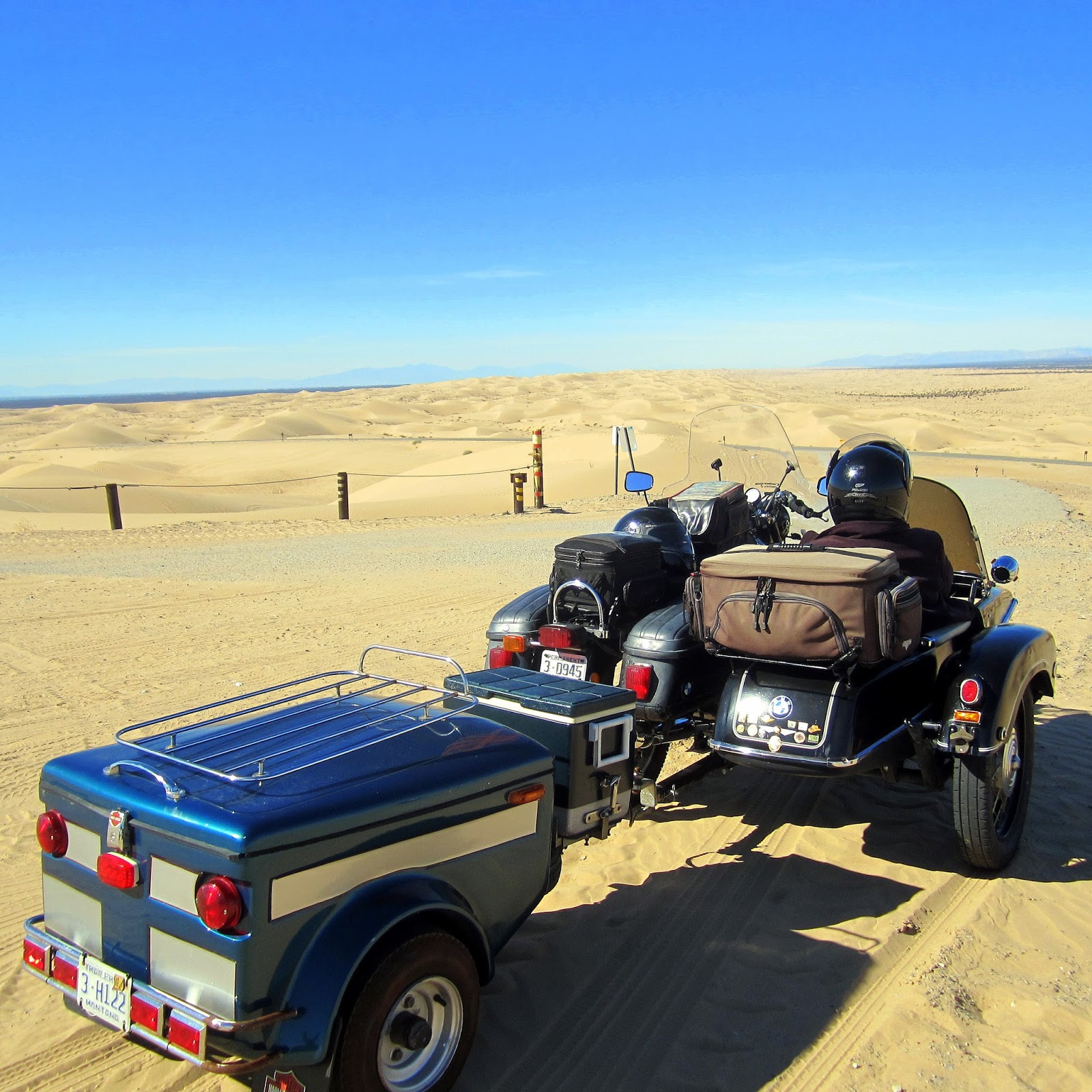 Another nice little get away and no bike issues. Bike belched out a bunch of smoke when I started in Sunday to leave. The engine does that every now and then when starting. Very little oil usage so I'm not worried about that.
Posted by BMW HACKER at 11:26 AM 1 comment: Links to this post

Been spending some time sorting through old BMW parts recently. I have numerous old parts which I doubt I'll ever use. At one point I considered assembling another bike. I have some frames, spare engine, transmissions, final drives etc. But upon thinking it through I decided that time would be better spent maintaining the bikes I already have, rather than taking on another "build". Plus there were numerous parts I am missing to even assemble a "rolling chassis".
I went through all the old parts and spent most of a day cleaning and sorting what I thought would be marketable via EBay. Ended up listing a couple of final drive assemblies, both needing work. Also listed a spare 1970 era alloy turn signal, later model rear brake cylinder, misc. transmission parts from a dissassembled transmssion, a side stand, rear swing arms, /5 BMW wheels and a few other bits. I listed them all cheap so most should eventually sell.
Today I tore down the 1975 R60/6 engine we have been tripping over (in our outdoor laundry room shed) for the past year. The engine appears to be in pretty good shape, and I'm sure it would have run as is. I'll try to sell the pistons, cylinders & cylinder heads individually. They're not worth much but should bring a few dollars. The engine "bottom end" appears to be in good shape, but shipping / packaging is too costly to mess with. I'll likely run a Craigslst Ad in Phoenix to attempt to sell the frames / engine block.
I still have a large selection of parts which I keep as spares....3 transmissions, a rear final drive, rear swing arm, starters and a multitude of small items.
I've sold hundreds of items through EBay the past 5 years. Occasionally I end up needing something which I once had, but sold. In those instances I just have to bite the bullet and buy another part, but it doesn't happen often.
We packed today for our annual motorcycle trip to the Salton Sea / Bashfords Hot Springs Airhead gathering. The function is scheduled for Sat. / Sat. night but we plan on heading over on Friday. The weather forecast looks a bit shaky for tomorrow with 60% chance of rain. If the weather looks poor tomorrow, we'll head over on Sat. morning.
Posted by BMW HACKER at 11:00 AM No comments: Links to this post