I've finally had phone contact with the landowner who claims to have a WW2 BMW sidecar rig.
The gentileman contacted me through a Craigslist "wanted" ad.

The currant owner purchased a large section of property which the old owner had spent years filling full of junk. The new owner has spent the past year or so clearing all the junk out.
An old semi trailer there held a bunch of old Harley Davidson parts / bikes which the guy sold.
Also in the trailer was this (supposedly) old WW2 BMW motorcycle and sidecar.
It is possible the bike could be an old Russian bike or possibly an old Chinese bike but you never know. The owner had a friend do a little research but never did pin down exactly what it is.
We have made arrangements to meet the land owner there next Tuesday to look things over.
The sidecar is separated from the bike and hopefully things aren't scattered too far and wide.

These kind of finds don't come along but once in a life time, if it is in fact, a WW2 Military sidecar rig. I'll definately take my camera but not the trailer on this trip.
The place is only about 2.5 hours from my house so I can always make a trip over with a proper trailer if the bike is a legitimate military bike and if we can come to a price agreement....a lot of "IFS"....
I'll update the story as things develope.
Posted by BMW HACKER at 9:05 AM 1 comment: Links to this post

The Rat Tug under the knife

I finally decided to address the oil leaks which have sprung up on the R100S engine. I've had a cylinder base leak for quite some time and recently the engine started losing oil from behind the transmission. Probably the rear main seal.(?) Started the "dissection" at around 10:00 AM and spent an hour or so just removing body pieces. The side car comes off pretty quickly due to the "pinned" connections. Fuel tank , seat, windscreen, saddle bags, exhaust system came off next. 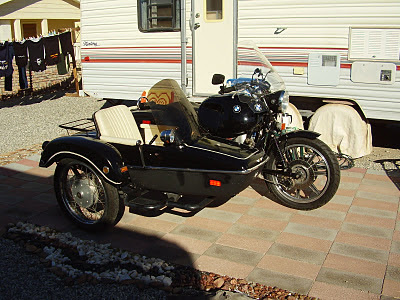 I've removed parts from this bike enough times to have it down to a pretty quick scenario. 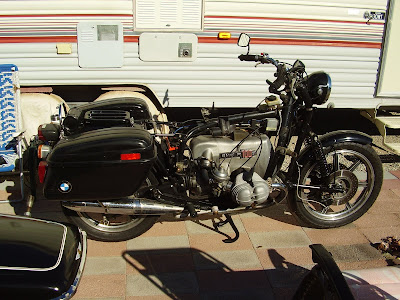 The transmission came off to reveal quite a clean area showing where the oil has been flowing out. On our last road trip the clutch slipped while pulling a long grade. A sure sign of oil on the clutch plate. 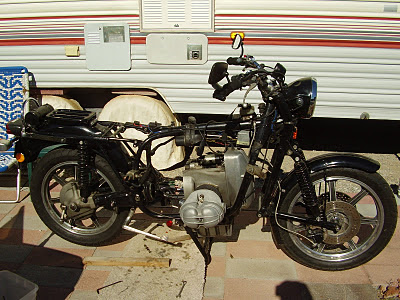 I ordered a set of bolts which facilitate the removal of the clutch assembly. The diaphragm spring must be released in stages to avoid warping things and also getting a face full of parts when it comes "springing" off. 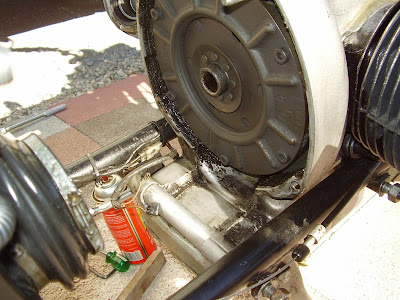 I also wanted to address a cylinder base leak so pulled the top end off after removing the transmission. I found a "squished" head bolt o-ring which I botched when I assembled the engine a couple years ago. I will install a pair of metal base gaskets upon re assembly which will slightly reduce the compression ratio and assure cylinder base sealing.

My next surprise was finding a recessed exhaust valve on the right cylinder. This answers the problem I had with valve adjustment issues which were required too regularly. 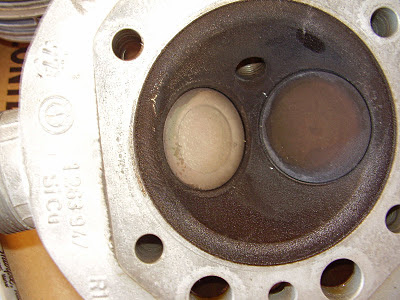 The cylinders still look good but there is quite a bit of carbon build up on the pistons and cylinder heads. 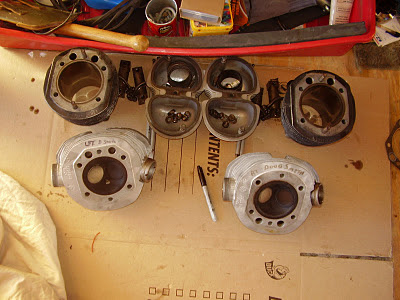 I made a call to Mesa AZ. to an Airhead friendly repair shop. The heads will be shipped over to them for reworking. hopefully the rebuild won't break the bank. 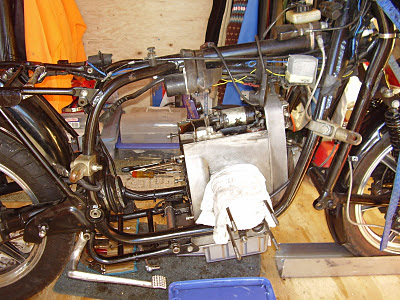 I also placed an order for all the seals / gaskets needed and a new clutch plate since mine is likely oil soaked.

Todays progress took about 4 hours to completely tear the bike down. I'll likely remove the engine from the frame to allow easier acess to the clutch assembly. I'm fairly certain the engine will need a new timing chain but I'll address the oil leaks / clutch first.

The crankshaft must be blocked into place whill working on the clutch assembly. This requires blocking the crankshaft behind the timing/front engine cover to keep it from moving forward, which can allow a bearing to fall off it's locating pins which open a huge can of worms.

Any timing chain issues will be addressed after the rear engine seal issues are taken care of.

I've had some correspondance with a land owner an hour or so away who claims to have a WW2 German Sidecar rig which he may be willing to sell.
The story goes:
He bought this ranch property years back and there was some old Harley stuff and an old WW2 German sidecar rig in an out building. He sold the Harley parts to some Harley guys and they offered him $2000.00 for the sidecar rig at that time. He decided to keep the sidecar rig for a possible future project. He never got around to the project so it still sits.
I'm hoping to make arrangements to get over to the place in the next week or so to see what he has. He has never tried to sell the bike and has never researched it.
Maybe it will be an ultimate barn find? Who knows.....
Posted by BMW HACKER at 4:54 PM 1 comment: Links to this post

When I acquired this old R75/5 BMW in Nebraska the owner claimed to have a Title and all the missing parts....RE: Fenders, tail light, rear signals, Toaster Tank Panels, etc.
After hounding him for weeks the guy never came up with anything he said he had.
I spent a day and got the old bike running so at least I know the engine is apparently sound.
I've spent a few hundred dollars on parts but decided I'd better address the title situation before spending more on a bike I might not ever be able to license for the road.
I found the old registration taped under the seat but the registration was for a 1973 BMW and the V.I.N. numbers did not match the frame.(?)
I ran the serial numbers through a BMW data base and the bike started life as a 1971 R75/5. 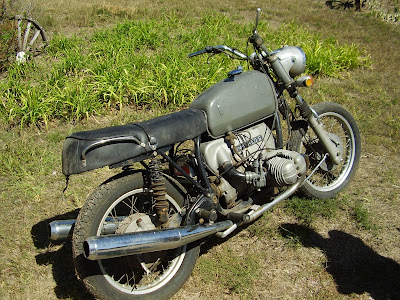 I hounded the seller for a couple of months for the Title but after thinking it over, his Title was worthless anyway if the numbers didn't match. If I ever went to sell the bike and the numbers were wrong, I'd end up with a nightmare legal situation.
I went to the MT. DMV and picked up the paperwork to acquire a new Title. Then the bike went to the Montana Highway Patrol for an inspection and an NCIC V.I.N. check to make sure nothing came up as stolen. Luckily everything came out clean....the next step was contacting an Insurance Company to acquire a Bond to guarantee the title. ($100.00).
So the bond will be here today. Then I take the MT. State Police paperwork, the Bond and the Bill of Sale to the MT. DMV and they will issue a new Title and license plates. Total cost will be a $100.00 plus DMV fees. Not that bad of a hassle. I always read of folks having impossible title problems but MT. has a system that is pretty easy to work. 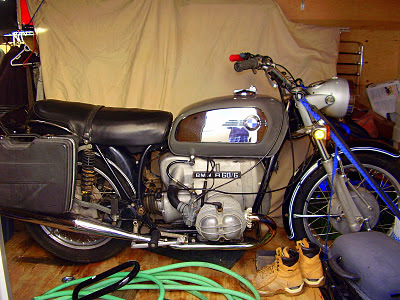 I'm looking forward to getting the old thing in running order, but first priority is to get the R100S sidecar rig repaired. It will likely need a new rear main seal, cylinder base reseal and probably a new timing chain.(?)
I'll be digging into that as soon as we get settled in Yuma, AZ.